Please join us on Thursday, May 3rd  for the 29th Annual AGSM Art Auction. This year’s event is celebrating the hip mid-century with 50’s inspired decor and clothing, as well as taking place at Brandon’s own homage to mid-century architecture and design, the Western Manitoba Centennial Auditorium. Beginning at 6:30pm, we will be offering up delicious appetizers, an open bar (with martinis, wine, and beer), live music by the Brandon Community Jazz Band, and incredible live and silent auction works by artists in the region and beyond. Sure to be one of the most fun parties this season, you won’t want to miss out! Tickets are available online, over the phone, or in person at the AGSM.

Diana Thorneycroft is a Winnipeg based artist who has exhibited across Canada, the US, Europe, as well as Moscow, Tokyo, and Sydney. She has received many awards such as the Winnipeg Arts Council “Making a Mark” award, and the Fleck Fellowship from the Banff Centre for the Arts. Using photography and drawing, Thorneycroft explores the darker side of supposedly ‘innocent’ or benign objects like dolls, toys, and cartoon characters. This image is part of the series Canadians and Americans (best friends forever... it's complicated). It is based on Andrew Wyeth's famous painting Christina's World. The AGSM will launch a new solo exhibition by Thorneycroft this June.

Fay Jelly is a Brandon-based painter whose long time focus on aspects of domestic life has shaped much of her work. Jelly works with an intense focus on detail, fragments, and passages that evolve into her abstract compositions. She has participated in numerous mentorships with artists such as Michael Boss, Wanda Koop, Diane Whitehouse, and Lisa Wood. Jelly has exhibited her work in galleries around Manitoba and Saskatchewan, as well as internationally in Australia and Tasmania. A community favourite, Jelly is well collected in our region, and will be next showing her work in a two-person exhibition at 12th Street Studio in May.

McLeod is arguably Canada’s foremost Contemporary CGI Artist. Best known for his sumptuous 3-D-rendered landscapes and animations, the Toronto-based artist has completed major commissions from The Whitney Museum of American Art, Global Affairs Canada, TD Bank, the Museum of Contemporary Canadian Art, and more. He recently won a competition to create Toronto’s longest mural for Metrolinx’s Davenport Diamond Guideways. When it opens in 2022, the 1.4 kilometre-long mural titled Secret Park Gate, will feature a series of six scenes, responding to the built urban environment around the rails. McLeod grew up in Scarborough, and received his Masters of Digital Media from Ryerson University in 2016.

Peter Morin is a Brandon-based performance artist, curator, and writer from the Tahltan Nation. In his artistic practice and curatorial work, Morin investigates the impact sites that occur when Indigenous cultural-based practices and western settler colonialism collide. In 2014, Morin was long listed for the prestigious national Sobey Art Award, and in 2016 received the Hnatyshyn Foundation Visual Arts Award for Mid-Career Artists. Morin has participated in numerous group and solo exhibitions including the World’s Largest Bannock attempt (2005) and Peter Morin's Museum (2011). In addition to his art practice, Morin has curated exhibitions at the Museum of Anthropology, the Yukon Art Centre, and will be traveling to Berlin in June to perform at SAVVY Contemporary Gallery. Morin joined the Visual and Aboriginal Arts Faculty at Brandon University in 2014.

Lisa Wood is an artist, collaborator, and educator. She has a Bachelor of Fine Arts degree from the University of Manitoba and a Master of Fine Arts degree from Yale University. She has been the recipient of numerous awards and scholarships and has exhibited her painting and prints nationally and internationally at venues including: the AGSM, Actual Contemporary and Plug In ICA (Winnipeg), Julie Saul Gallery (New York City), and Warte Für Kunst (Kassel, Germany). Lisa is now based in Brandon, Manitoba and is an Assistant Professor in the Department of Visual and Aboriginal Art at Brandon University. Lisa has a solo show of two-sided mylar paintings opening at Neutral Ground in Regina this fall.

Neil Farber is a Winnipeg-based contemporary artist who has exhibited internationally. He received a Bachelor of Fine Arts Honours from the University of Winnipeg in 1996, and was a founding member, along with Marcel Dzama and others, of the highly influential collective, The Royal Art Lodge. Farber’s work is in the permanent collections of: MOMA, New York; MOCA, Los Angeles; Olbricht Collection, Essen and Berlin; National Gallery of Canada; Winnipeg Art Gallery; and more.

Chris Reid is a visual artist and educator based in Brandon. She received a Bachelor of Fine Arts and Bachelor of Education from the University of Alberta and a Master of Fine Arts from the School of the Art Institute of Chicago. Her work has been exhibited across Canada and the United States, including an exhibition and accompanying catalogue at the AGSM in 2013, co-produced with Gallery 1C03 and the Oseredok Ukrainian Cultural Centre in Winnipeg. Recently selected as a featured artist for Brandon’s Winter Gardens project, Reid’s work was publicly on display in the city to liven up the colder months. In 2018, she will be exhibiting new works at the Reach Gallery in BC.

Adrian Stimson is a multidisciplinary artist based in Siksika (Blackfoot) Nation in Alberta. He recently was awarded Canada’s Governor General’s award in Visual and Media Arts for 2018, and is currently has an exhibition atup atexhibiting in the National Gallery of Canada. Stimson’s work incorporates themes of cultural fragility, resilience, gender, and nostalgia. Often the most parodic of pieces turn gut-wrenching to explore stereotypes of Indigenous peoples, the legacy of residential schools, and the subject of missing Indigenous women. Stimson has received the Queen Elizabeth II Golden Jubilee Medal, and his work has been collected by many prominent galleries including the British Museum, the Canadian Museum of Civilization, and the National Indian Arts Center.

Kelly Jazvac works in collage, installation and sculpture. Puff (paper) is a photographic image of a collage made with material salvaged from the commercial signage industry. The work is printed on wallpaper that adheres directly to the collector’s wall. A digital file is provided that allows the collector to order a new print at cost when they move homes, or need to re-locate the work. Jazvac’s recent exhibitions include the CAC Brétigny (Paris); the Palmer Museum (Penn State University); The Museum of Capitalism (Oakland); Parisian Laundry (Montreal); FIERMAN (New York) and Gallery TPW. She is based in Montreal, QC, where she is an associate professor at Concordia University. The AGSM recently exhibited her show, Sharp and Numb, in the summer of 2017.

Brandon, Manitoba based Tim Smith is a photojournalist with a distinguished career. He has an impressive list of national and international awards for his photography, and his work has appeared in The New York Times, The Los Angeles Times, The Guardian (UK), The Independent (UK), and The Globe and Mail. A seminal moment in Tim’s career came when he started as a freelancer for the Edmonton Sun, working alongside award-winning photographers, where he fine-tuned his skills and further developed his style. This eventually led to him taking a staff position with the Brandon Sun. In 2016, Tim was awarded the National Newspaper Feature Photo award, for an image that appeared in the Brandon Sun, and shortly thereafter, was a featured in a 2016 AGSM exhibition titled, Hutterites of Manitoba.

Curt Shoultz is a prominent local educator, artist, and illustrator. Formerly a freelance illustrator and inker for DC Comics, he has taught illustration and design throughout Brandon, including courses and workshops at the AGSM. His vibrant, pop art inspired work has been shown and published locally and nationally, and is widely collected. Curt currently writes and illustrates the popular Brandon Sun comic strip, Brandoon Stack Cats, and he is the Director for Brandon University’s Centre for Teaching, Learning, and Technology. A highly revered figure in the community, he has supported the AGSM ever since the days of the Brandon Allied Arts Centre. This work is dedicated to Steve Gouthro.

Weiming Zhao is a Brandon-based artist who has practiced plein air painting on a daily basis for many years. He hones his painting skills and artistic observation through this disciplined daily practice. For over a decade, Zhao has never spent a single day without producing one plein air painting, and has created an impressive portfolio of over three thousand works that have been shown in ten solo exhibitions. The winner of this auction will enjoy a unique opportunity of having Zhao create a custom painting of their home, cabin, or business.

THANK YOU TO THE 2018 MID-CENTURY MADNESS SPONSORS: 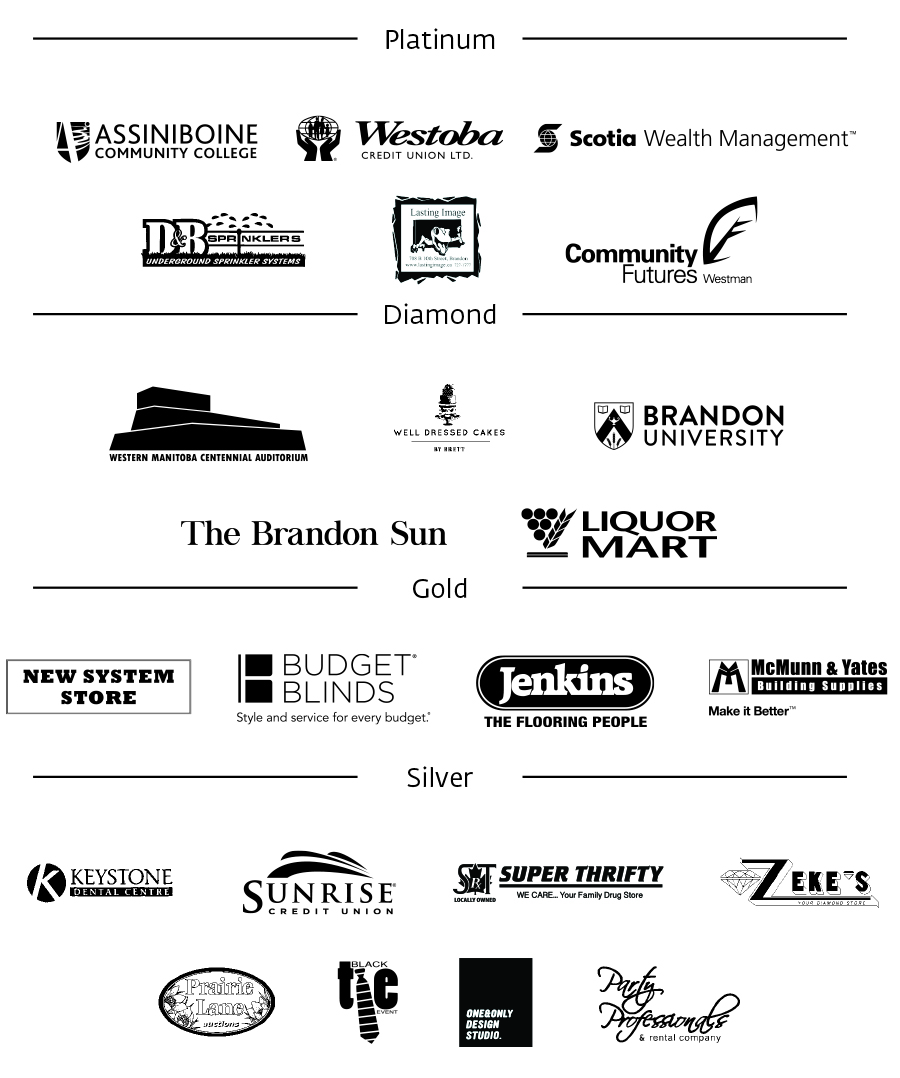